Concussion is a diagnosis that has been present within the medical body of literature since the time of Hippocrates, however, it has been all but ignored as a significant and deleterious disease process until the past 10 years when professional athletes and media attention brought it to the forefront of awareness within Sports Medicine, and other subspecialists who deal with athletes.

The science of concussion is only now beginning to accelerate as scientists and clinicians collaborate to evolve understanding of this injury and its implications.

Highmark Health’s clinical team has acquired many years of diagnosing and treating concussions, and in so doing has established a solid clinical acumen on which to base diagnostic and return to work, learn or play decisions. Furthermore Highmark is committed to treating concussion as a “whole brain” injury and utilizes a number of medical technology facilitated assessment processes to more objectively define neurologic dysfunction. Baseline assessments, before an injury has occurred, are strongly recommended by the Highmark team as a critical means of better diagnosing concussion as we compare “Johnny to Johnny” and not to a vague set of population norms.

The multidisciplinary team approach at Highmark, is a cornerstone of our 360-degree approach to the treatment of concussion and post concussion syndrome. Since concussion is primarily a cellular injury first, there are a variety of symptoms and patterns, and at Highmark the saying is: concussions are like snowflakes – every one is different. We have found that concussions tend to present with symptoms and therefore treatment that can be roughly separated into the following trajectories:

Patients present with symptoms reflective of dysfunction in some or all trajectories in a variety of patterns, and this is the key reason that Highmark assesses concussion as a global injury, and treats it from a multidisciplinary perspective.

Patients who have suffered from a concussion often notice the following regarding their efforts to engage in physical activity:

Highmark’s clinical team has managed and cared for a significant volume of patients over their decades of clinical experience, and observed the above feature consistently in non-athletes, as well as amateur and professional athletes. Clinicians at the University of Buffalo had similar observations and over the past several years designed a protocol for assessing and following this dysfunction –  Buffalo Treadmill Concussion Test (BCTT). Highmark employs the BCTT in all concussion patients before clearing patients to return to play and/or return to any form of significant exercise regime. 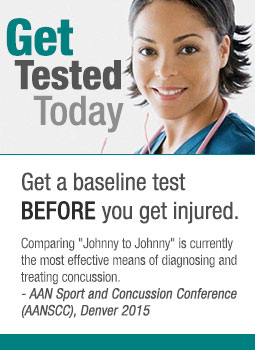